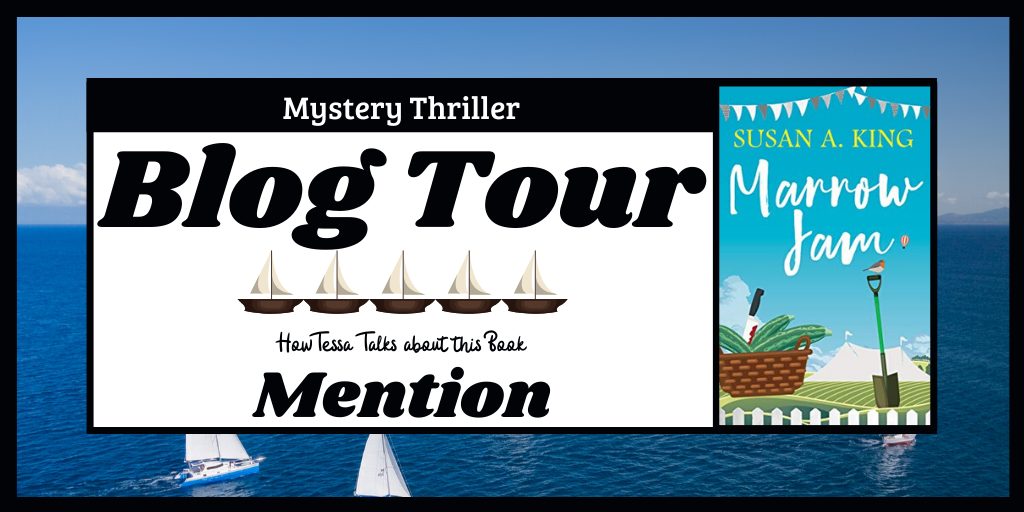 Some people would describe Beattie Bramshaw as a pillar of the community. Others would praise her role as a stalwart of the Women’s Institute. Many would applaud her numerous successes in the bakery category at the annual village show. A small number might say, if pushed, that they find her a little on the bossy side. And one or two might whisper the words ‘interfering’ and ‘busybody’ behind her back.

But no one would have her down as a murderer.

​So why is she being questioned in Dreighton police station after being found in the local allotments, at the dead of night, wielding a kitchen knife just yards away from where local lottery winner, Yvonne Richards, was found stabbed to death? And what does all of this have to do with Doug Sparrow’s prize marrows?

​Marrow Jam is a comedy crime caper in the spirit of Agatha Raisin. It will have you chuckling all the way through many cups of tea.

How Tessa Talks about this Book: Mentions

Full of quirky fun, Marrow Jam sets the stage for a new type of cozy mystery – one where the story is told through a recounting by an accused murderer. When I first read the title. I didn’t know what to think. I didn’t even know what Marrow Jam is. Marrows and marrow jams are not common in the US, where I have always lived. I thought the title was referring to bone marrow, not a squash called a marrow. So, my American sensibilities were pretty disgusted. I am so glad I looked it up, discovered what it truly is, and read this delightful tale of murder, infidelity, and ruthless fair competition.

I liked that how the story is told is loosely through the eyes of one of the accused. The amateur sleuthing is a very minor portion of the story and didn’t occur until the very last bit. It still felt like a cozy, but yet different since professional detectives played such a pivotal role. Sometimes it would ramble a bit, like anyone telling a story would, and this lost me now and again, but as the story came closer to the murder, it became more and more focused, and the pages turned quickly.

I found Beattie to be an intriguing main character. Her portrayal is of someone larger than life – a real force to be reckoned with but in a delightful, quirky, and endearing way. Her age is never outright stated, though a general birth year is given, so I know she is an older adult. I felt that the people around her showed a great deal of respect – some even were scared of her, but in a way that indicated they had a great deal of respect for her. I would say she is no stranger to crazy Lucille-Ball-style antics, but that just made her fun and lovely to read about.

I found the focus on older adults fascinating. It is heartening to think about being at that stage of your life and still finding a love that can make you giddy. The different portrayals of love felt very realistic, and it’s something I think perhaps younger people have a very skewed perception of – one that says that part of your life will be over.

I did guess the murderer very early on, so the ending came as no surprise. I didn’t mind that, though, since the story getting there was so entertaining. If this is an approach that appeals to you, then you will love this book.

Thank you to Lightning Books for providing me with a copy of the book in exchange for an honest review.

Susan A King lives with her husband in a quiet suburb in Hampshire. Between them they have four grown-up sons.

The inspiration for her first novel, Marrow Jam, came from her long experience and observation of competitors at the local Romsey Show, where she regularly aspires to win Best in Show with her floral arrangements.

3 Replies to “Book Review | Marrow Jam by Susan A. King”