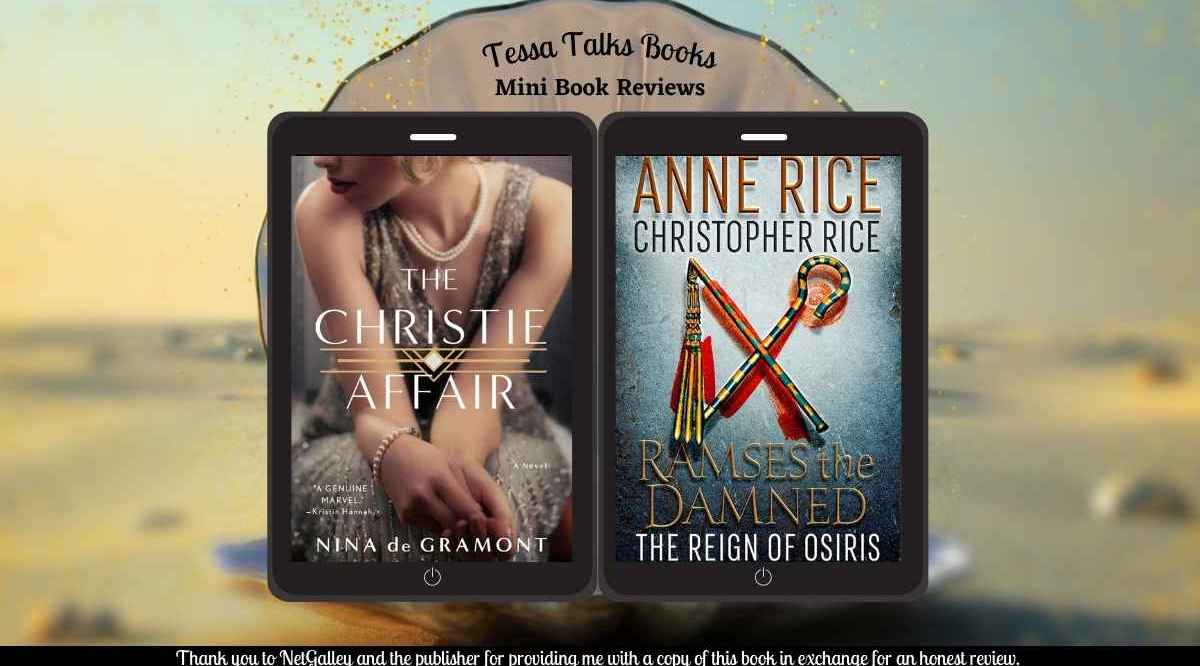 Why would the world’s most famous mystery writer disappear for eleven days? What makes a woman desperate enough to destroy another woman’s marriage? How deeply can a person crave revenge?

In 1925, Miss Nan O’Dea infiltrated the wealthy, rarefied world of author Agatha Christie and her husband, Archie. In every way, she became a part of their life––first, both Christies. Then, just Archie. Soon, Nan became Archie’s mistress, luring him away from his devoted wife, desperate to marry him. Nan’s plot didn’t begin the day she met Archie and Agatha.

It began decades before, in Ireland, when Nan was a young girl. She and the man she loved were a star-crossed couple who were destined to be together––until the Great War, a pandemic, and shameful secrets tore them apart. Then acts of unspeakable cruelty kept them separated.

What drives someone to murder? What will someone do in the name of love? What kind of crime can someone never forgive? Nina de Gramont’s brilliant, unforgettable novel explores these questions and more.

In December 1926, Agatha Christie disappeared for 11 days after her husband told her he was leaving her for his mistress. Agatha’s car was found abandoned, but no sign of the famous author anywhere. What happened and why? The Christie Affair details Nina de Gramont’s fictionalized account of what happened during those mysterious 11 days. The story de Gramont writes is fascinating and even, at times, tragic and scandalous. The delivery was a bit dry for me, but it is totally in keeping with novels written during the turn of the century. And, I did not particularly care for the narrator throughout the story – the mistress of Agatha’s husband – and would have much rather the narrator been a third party, like Finbarr – the lost love of the mistress, someone who has a stake in the story but is every bit sympathetic. But even with all the things I wish were a bit different, the intriguing story still stands out as a bright contrast to those things. The Christie Affair involves a mystery with a shocking conclusion plus bits and pieces of little-talked-about realities in Ireland around the turn of the century, such as the Magdalene Laundries/Convents. If you are looking for a scandalous answer to the question of where Agatha Christie was during those eleven lost days, look no further than The Christie Affair by Nina de Gramont.

The Reign of Osiris by Anne and Christopher Rice

The gilded adventures of Ramses the Damned, iconic creation of the legendary bestselling author, continue in this breathtakingly suspenseful tale of a titanic supernatural power unleashed on the eve of war.

A pharaoh made immortal by a mysterious and powerful elixir, Ramses the Great became counselor and lover to some of Egypt’s greatest and most powerful rulers before he was awakened from centuries of slumber to the mystifying and dazzling world of Edwardian England. Having vanquished foes both human and supernatural, he’s found love with the beautiful heiress Julie Stratford, daughter of Lawrence Stratford, the slain archeologist who discovered his tomb. Now, with the outbreak of a world war looming, Ramses and those immortals brought forth from the mists of history by his resurrection will face their greatest test yet.

Russian assassins bearing weapons of immense power have assembled under one command: all those who loved Lawrence Stratford must die. From the glowing jewels at their necks comes an incredible supernatural force: the power to bring statues to life. As Ramses and his allies, including the immortal queens Cleopatra and Bektaten, gather together to battle these threats, Ramses reveals that the great weapon may have roots in an ancient Egyptian ritual designed to render pharaohs humble before Osiris, the god of the underworld. The resulting journey will take them across storm-tossed seas and into the forests of northern Russia, where they will confront a terrifying collision of tortured political ambitions and religious fervor held in thrall to a Godlike power. But the true answers they seek will lie beyond the border between life and death, within realms that defy the imagination of even an immortal such as Ramses the Great.

Anne Rice’s very last book (written with son Christopher Rice), The Reign of Osiris (Ramses the Damned #3), is the captivating story of Ramses the Great and explains, as only Anne Rice can, how Ramses lived for far longer than any other Pharoah. An ancient elixir made Ramses immortal and allowed him to advise the greatest pharaohs in history until he decided to take a break deep inside a long-buried sarcophagus. Lawrence Stratford, an archeologist, interrupted that eternal slumber in the early 1900s after discovering Ramses’ resting place, and he was shipped back to London. Once he reawakens, the adventures begin in book 1, The Mummy, through Book 2, The Passion of Cleopatra, and end with this book.

No one tells a paranormal story like Anne Rice. Her world-building is so rich and complex that there is barely a need for suspended disbelief, as this complex world must exist outside the book’s pages. Her characters are tragically flawed, layered with yearning and doubt, and sympathetic in their need for what we all long.

As always, there are many big themes explored in this fast-paced, action-packed tale of greed, power, and corruption that the immortals living among us must conquer for the good of all humanity. Other themes – such as life and death, the afterlife, and the role of one of those involved when a person passes into the realm of the dead – are all explored in fascinating observations that I will be contemplating for years to come.

The Reign of Osiris can be read as a stand-alone novel, but reading the other two books first adds a depth that cannot be achieved with one book alone.

If you are looking for a captivating tale that will hold you riveted from beginning to end, The Reign of Osiris (Ramses the Damned #3) is just the story you must read.