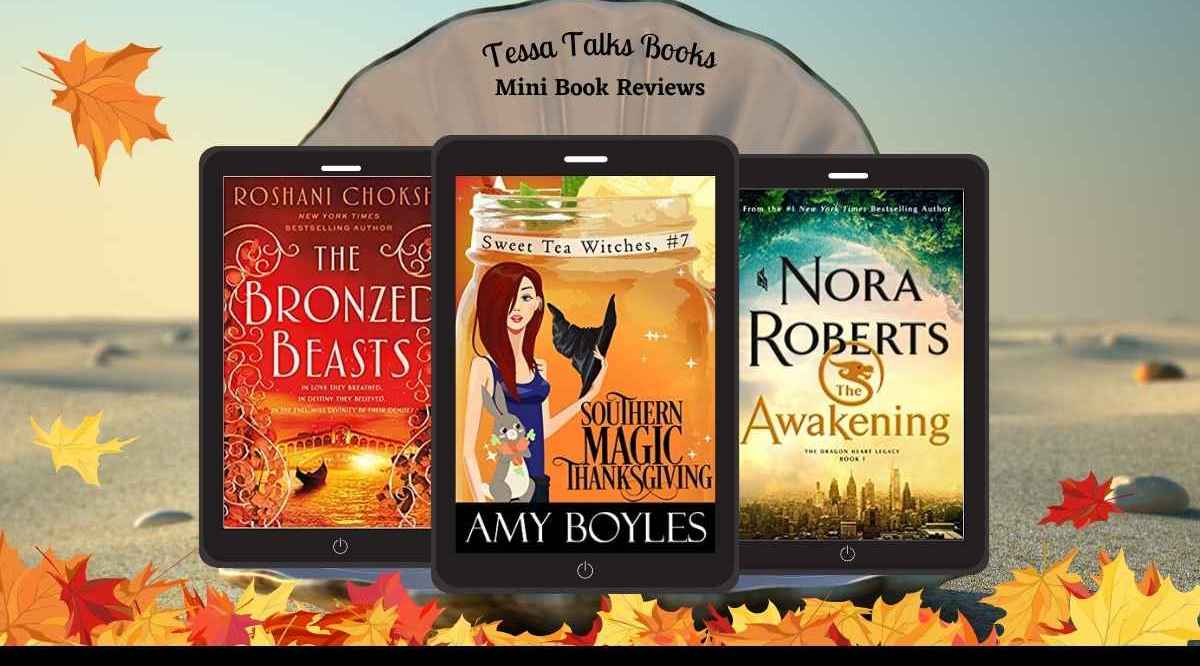 But she has little time to mourn. When a new baker sets up shop across the street from Pepper’s cousin and starts stealing customers, it’s all out war. But when the storeowner ends up murdered and Pepper’s cousin becomes suspect number one, it’s up to Pepper to help.

Thrust into a mystery, she teams up with a talking rabbit that’s keeping more information than he’s revealing and an old foe turned friend. More secrets than Pepper bargained for unravel in front of her, but the main one—who killed the baker, is anyone’s guess.

Will Pepper solve the murder or will she become the next victim?

Southern Magic Thanksgiving by Amy Boyles gave me that heartwarming holiday feel and added in a magical mystery that left me stumped until the turkeys ran from the table. To start with, I love all the happenings concerning turkeys that took place in the story. It had me laughing out loud so hard I had to put the book down for a minute each time. I just had to throw that out there because it was so darn entertaining. This is book 7 in the Sweet Tea Witches mystery series, but it was my first book. I had no problem getting into the book or understanding what was happening. Sure, I could tell that it is a story in progress, but I was given enough background info to easily keep up. It is set in Magnolia Cove, Alabama – a southern town that can only be accessed and lived in by witches and other paranormal creatures. It is like a mashup of any small southern town and Hogsmeade in Harry Potter. The only thing that bothered me at first in the novel was that the southern accent of a few characters was too much, but that was just a tiny thing. I quickly got used to it, or it stopped – I wasn’t really sure which. All the characters are magical and charming, especially the main character Pepper Dunn. She is head witch and determined to solve a mystery that has landed her cousin in jail over Thanksgiving. She is a spunky spitfire that can make things happen at will. The mystery stumped me, but I could see that all the clues were there once it was revealed, but I had been too distracted by all the fun magical elements. Southern Magic Thanksgiving kept me in stitches and warmed my heart – a lovely holiday-themed book with a touch of magic and mystery.

Returning to the dark and glamorous 19th century world of her New York Times instant bestseller, The Gilded Wolves, Roshani Chokshi dazzles us with the final riveting tale as full of mystery and danger as ever in The Bronzed Beasts.

After Séverin’s seeming betrayal, the crew is fractured. Armed with only a handful of hints, Enrique, Laila, Hypnos and Zofia must find their way through the snarled, haunted waterways of Venice, Italy to locate Séverin. Meanwhile, Séverin must balance the deranged whims of the Patriarch of the Fallen House and discover the location of a temple beneath a plague island where the Divine Lyre can be played and all that he desires will come to pass. With only ten days until Laila expires, the crew will face plague pits and deadly masquerades, unearthly songs and the shining steps of a temple whose powers might offer divinity itself…but at a price they may not be willing to pay.

The Bronzed Beasts, the third and last book in The Gilded Wolves trilogy, was a satisfying conclusion to the story that just took my breath away from page 1 of the first book.  It didn’t end as I thought it would or even as I feared it would.  Instead, it took a path uniquely its own, and I loved it!  This series offers four endearing characters, each with their own quirks and limitations.  They are on a mission to save one of their own by using a unique device that they have the clues to find.  This tale includes many Old Testament biblical references and magical components that blend together to produce an epic journey to survive and become human.  I loved this trilogy for its wonderful characters that come to life and jump right off the page and for the epic journey that is often harrowing and always full of suspense.

In the realm of Talamh, a teenage warrior named Keegan emerges from a lake holding a sword―representing both power and the terrifying responsibility to protect the Fey. In another realm known as Philadelphia, a young woman has just discovered she possesses a treasure of her own…

When Breen Kelly was a girl, her father would tell her stories of magical places. Now she’s an anxious twentysomething mired in student debt and working a job she hates. But one day she stumbles upon a shocking discovery: her mother has been hiding an investment account in her name. It has been funded by her long-lost father―and it’s worth nearly four million dollars.

This newfound fortune would be life-changing for anyone. But little does Breen know that when she uses some of the money to journey to Ireland, it will unlock mysteries she couldn’t have imagined. Here, she will begin to understand why she kept seeing that silver-haired, elusive man, why she imagined his voice in her head saying Come home, Breen Siobhan. It’s time you came home. Why she dreamed of dragons. And where her true destiny lies―through a portal in Galway that takes her to a land of faeries and mermaids, to a man named Keegan, and to the courage in her own heart that will guide her through a powerful, dangerous destiny…

The Awakening by Nora Roberts is the start of an exciting and whimsical fantasy by Nora Roberts.  Set in a world connected to our own, I was swept away by the land of fae in this novel.  The world-building takes on a mystical quality that is totally suited for the connection to Ireland.  The characters are well-developed and relatable despite the magical abilities, and the magic system is traditional so far.  It begins pretty slow, with too many small details bogging my reading pace down. Still, it quickly picks up speed once the main character gets to Ireland and starts making life-altering discoveries.  And did I mention that there are dragons!?!?  Yes, dragons! Overall, I found this an entertaining start to what could be an outstanding trilogy.

11 Replies to “Mini Reviews For Books Off Of My Bookshelf: Southern Magic Thanksgiving by Amy Boyles, The Awakening by Nora Roberts, and The Bronzed Beasts by Roshani Chokshi #BookReviews”

Leave a Reply to CJR The Brit Cancel reply