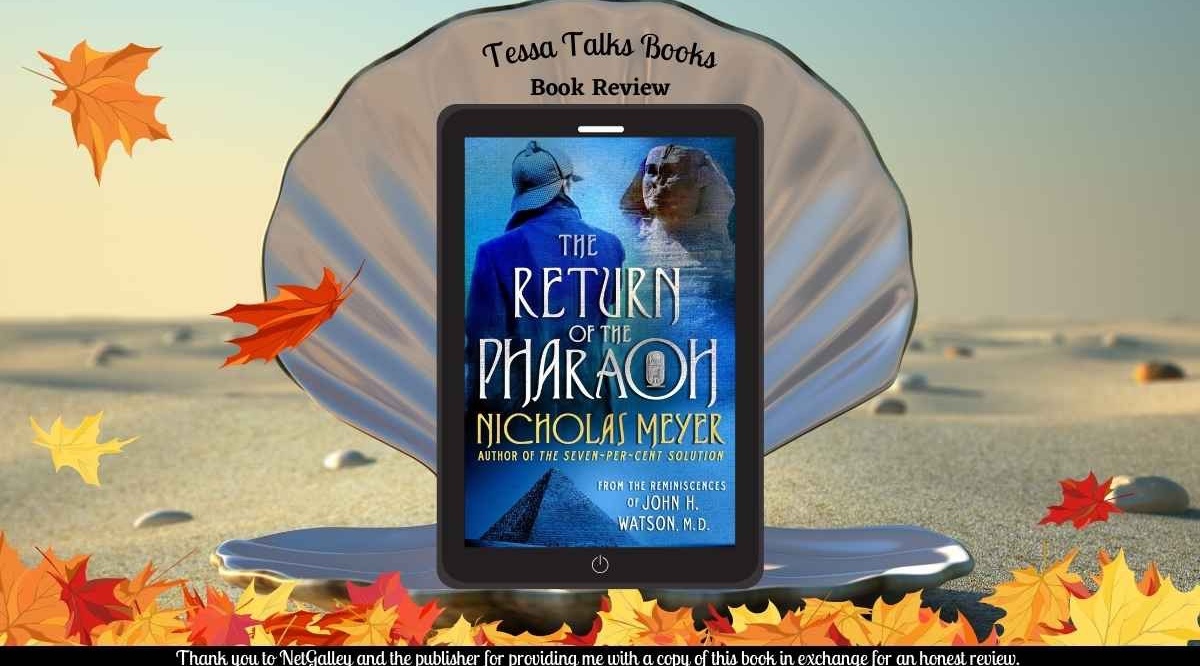 In Nicholas Meyer’s The Return of the Pharaoh, Sherlock Holmes returns in an adventure that takes him to Egypt in search of a missing nobleman, a previously undiscovered pharaoh’s tomb, and a conspiracy that threatens his very life.

With his international bestseller, The Seven Per Cent Solution, Nicholas Meyer brought to light a previously unpublished case of Sherlock Holmes that reinvigorated the world’s interest in the first consulting detective. Now, many years later, Meyer is given exclusive access to Dr. Watson’s unpublished journal, wherein he details a previously unknown case.

In 1910, Dr. John Watson travels to Egypt with his wife Juliet. Her tuberculosis has returned and her doctor recommends a stay at a sanitarium in a dry climate. But while his wife undergoes treatment, Dr. Watson bumps into an old friend–Sherlock Holmes, in disguise and on a case. An English Duke with a penchant for egyptology has disappeared, leading to enquiries from his wife and the Home Office.

Holmes has discovered that the missing duke has indeed vanished from his lavish rooms in Cairo and that he was on the trail of a previous undiscovered and unopened tomb. And that he’s only the latest Egyptologist to die or disappear under odd circumstances. With the help of Howard Carter, Holmes and Watson are on the trail of something much bigger, more important, and more sinister than an errant lord.

The Return of the Pharaoh by Nicholas Meyer is another Sherlock Holmes mystery from the reminiscences of Dr. John H. Watson.  What I enjoyed the most about this book, as I have other Nicholas Meyer’s Sherlock Holmes stories, is how well the tone, atmosphere, verbiage, and more reflect the original series by Sir Conan Doyle.  Yet, it adds an extra intangible Myers-ness that I especially enjoy.

Dr. Watson is married to the lovely Juliet. She is having a reoccurrence of tuberculosis, so she must go to a better climate to heal.  At her doctor’s advice, the couple heads to a hospital in Cairo, Egypt, a spa-like facility for ex-military and their families.  The exchanges between the loving couple provide a foundational element that makes the notoriously cerebral tale more relatable and humanizes in unexpected ways.  And Juliet having consumption gives a little touch of relatedness to today’s covid pandemic.  I loved that small little relatable touch.

Watson forgets to contact Sherlock Holmes to let him know about the trip.  But, surprise surprise, one night when he decides to go to a bar in the city after Juliet retires for the evening – who is sitting next to him at the bar and wearing his military uniform tie – none other than his dear friend Sherlock Holmes. Watson’s annoyance and Holmes’ logic meet in some of the funniest exchanges in the story.  I love these little bits of humor that come from minor annoyances that only true friends can have.

I also enjoyed how the story picks up to thriller speed as Watson and Holmes face peril after peril while figuring out what happened to the duke that Holmes is hired to find. The adventure to solve the mystery leads them all over Cairo and to an illegal archaeological dig in the Valley of Kings. The setting is brilliant and lends to the thrills as I was reminded of great action adventures stories that have also taken place in the exact location.

The setting made me think of Indiana Jones, and I liked that.  It added to the thrills of the second half of the novel.

Dr. Watson is the ever-present unflappable foil to Sherlock Holmes’ intense logical mind. Whereas Holmes is so logical that he doesn’t understand the intricacies of human emotion, Watson understands perfectly and yet is just as astute in discerning clues as the detective.  Together, they make a formidable investigative team.

I kind of wish – and this is not a critique, just an observation – that it would be possible to maintain the Sherlock Holmes-ness of the story while using vocabulary that is more accessible.  The verbiage can make the story a little dense in parts and slow down the pace.  I would not wish to take away the Holmes-ness, though, if making the vocabulary more accessible had that impact.

If you are looking for a Sherlock Holmes mystery with lots of thrills and plenty of Holmes-ness, you must pick up this book today. You are going to love it!