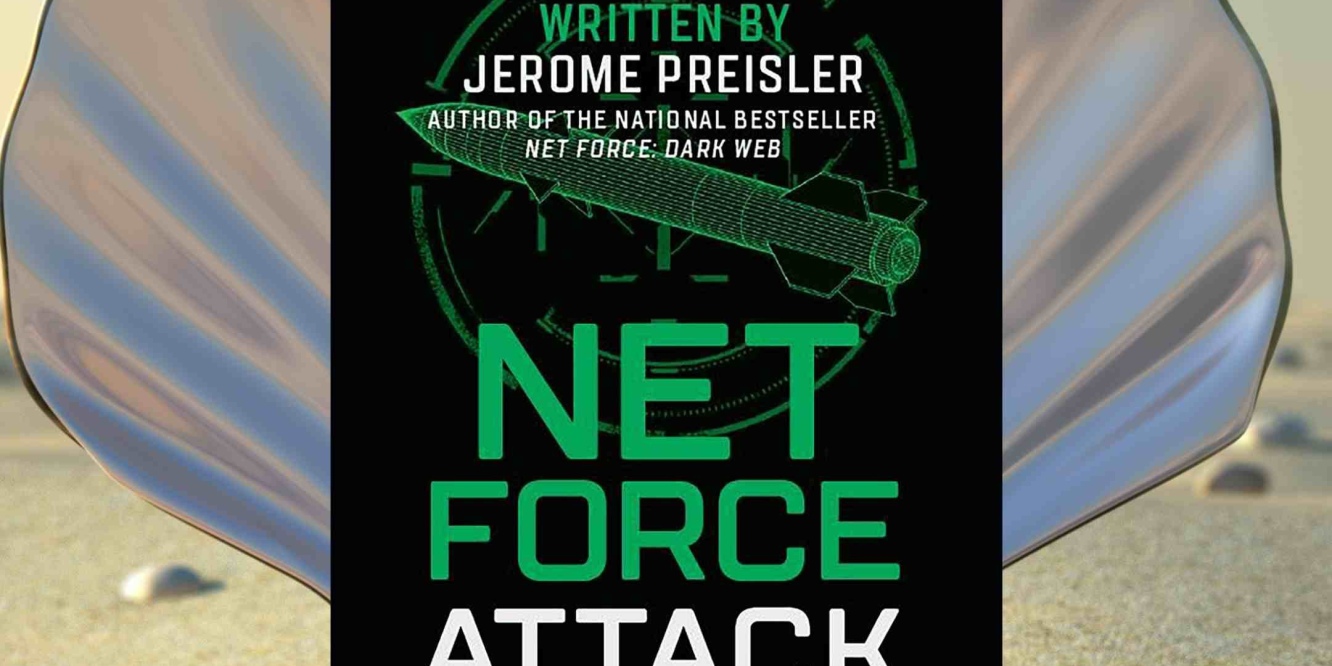 The cutting-edge Net Force thriller series, created by Tom Clancy and Steve Pieczenik and written by Jerome Preisler reveals the invisible battlefield where the war for global dominance is fought.

In the wake of stunning terrorist attacks around the world, Net Force jumps into action. The president’s new cybersecurity agency homes in on a dangerous figure operating in the shadows of the Carpathian mountains. And he’s ready to strike again, using the digital space to advance his destructive goals.

But before Net Force can get boots on the ground, the master hacker and his cadre mount a devastating high tech assault against the agency’s military threat-response unit. Has a Net Force insider turned traitor? The stakes are suddenly ratcheted higher when a global syndicate of black hat hackers and a newly belligerent Russia hatch an ambitious scheme to plunge the United States into a crippling war—one that will leave Moscow and its Dark Web allies supreme.

Their attack protocol: to seize control of the Internet, and open the door for a modern, nuclear Pearl Harbor…unless the men and women of Net Force can stop them.

Net Force: Attack Protocol, created by Tom Clancy and written by Jerome Preisler, is a technothriller set in 2023. Net Force is up and running, but they still are trying to find their arch-nemesis, The Wolf. This time, he puts his technologie vampiri to work against a US base in Romania, hacking their attack robots and a fleet of 100 attack drones, turning the US’s AI against them in the most horrific way imaginable.

Kali Alcazar the Outlier – She is back in this novel, and she is still a very complex character whose loyalties are always in question. She is smart, no-nonsense, and able to take down large bodyguards in a single blow…okay, that a little bit of an exaggeration, but she did take down a sizeable bad-guy. Most importantly, she makes the right choices in challenging situations.

I also have some new favorites in Mario and Laura, who are on the base when the attacks begin. Mario is a robotics specialist, and Laura is a clerk at the bases’ PX. Together they decided to take the path of heroes, possibly at the expense of their own lives. And that’s all I can say about them without giving away spoilers, but I loved their story.

I love that the book is set in Romania and that the bad guys are called the technologie vampiri. How appropriate! And I also love the castle with its secret passageways and trick walls, not to mention the underground tunnels. Many cool aspects to this novel, which are minor details for the plot, provided intriguing visuals that stimulated my imagination.

Exceptionally well written, there is just the right balance of dialogue and exposition, enabling the reader to maintain a fast pace. The flow from various parts of the story is logical and easy to follow. And the plot stays focused. The story is about technology, so there is lots of tech jargon. Fortunately, it is written in such a way that it is easy to understand. And, the technology in the story adds a cool factor.

Net Force Attack Protocol is an excellent read for people who like technothrillers or just thrillers in general, and if you love Jack Ryan on Amazon Prime or similar shows and movies, this series is a good match for you, just as it was for me.

Thank you to NetGalley and the publisher for providing me with this ARC in exchange for an honest review.

The first snowfall of the season was dusting the banks of the Somes River when a catastrophic failure struck the power grid, plunging the western third of the country into darkness.

Nicu Borgos was just an hour into his midnight shift when things went wrong. An operator for Satu Mare District’s Electrica Power Distribution Center, he was tired from caring for his daughter, who was seven and sick with the flu. His wife, Balia, a sales clerk at a clothing store, was also miserably under the weather, and he had been doing his best to help her as well. But money was tight and, like him, Balia needed to work and bring in a paycheck.

The night before, she had come home from the shop, put chest rub on Angela, tucked her in, showered, and climbed into bed with her dinner untouched. Nicu normally slept until 9:00 p.m. or even a little later, but the sounds Angela was making in her room concerned him. He had lost his dear mother to the pandemic three years ago, and the outbreaks still could be vicious.

Taking no chances, he’d resolved to stay up to check on the child, poking his head through the doorway every fifteen or twenty minutes. It was a while before she settled in.

So Nicu was worn out and bleary, which might have been why he doubted his eyes when he saw the cursor suddenly drifting across his screen. The computer was networked into the energy grid, and the numbered blue buttons on its display controlled the circuit breakers for ten substations throughout the county—an area of almost seventeen hundred square miles, with some three hundred thousand residents.

The cursor landed on the switch for Substation One. Clicked. A dialogue window opened below the button:

Warning: Opening the breaker will result in

complete shutdown. Do you wish to proceed?

Reaching for his mouse, Nicu tried to drag the cursor out of the window, thinking its driver might have developed a minor glitch. But it remained there…and slid to Yes.

He quickly swiped the mouse across its pad, wanting to move the cursor to No.

It stayed on Yes. Clicked. The dialogue box vanished, and the button for Substation One changed from blue to red.

Nicu inhaled. He had been an operator at the distribution center for half a decade and did not need to bring up a map to see the region each substation covered. The map was already in his head.

Substation One was Lazuli, a rural commune of six villages to the extreme north, near the Ukrainian and Hungarian borders. Its six thousand residents had now gone off-line. Even as Nicu registered this, the on-screen cursor jumped to the Substation Two button.

He snatched up the mouse in desperation, lifting it above the pad. It made no difference. The cursor clicked. Opened another dialogue window requesting confirmation. Went to Yes again.

Blue turned to red, and Nicu Borgos watched Substation Two go down in an instant.

Substation Two was the city of Satu Mare itself. With a population of one hundred thousand—a full third of the county’s inhabitants—it was now completely dark.

Nicu tried to think clearly. During the day, the operating station would have two people on shift. There was a second computer to his left, with a separate monitor. Possibly the problem was only with his machine. If he could log in to the system using the other computer, he might prevent more breakers from tripping open.

He rolled his chair in front of it, tapped the keyboard. The computer came out of idle showing the operator log-in screen. He entered his username and password.

The notification appeared again. He was locked out of the system.

Nicu sat up straight, his spine a stiff rod of tension. His original machine showed that Substation Three, which provided power to Negresti Oas’s twelve thousand citizens, was down. He glanced at its screen just in time to see the cursor move to Substation Four…the distribution station for the commune Mediesu Aurit’s seven villages. The two stations combined served more than twenty thousand customers.

He remembered that tonight’s temperature was forecast to drop below freezing in the mountain areas, and felt suddenly helpless. Whatever was causing the shutdowns, he could not deal with the growing emergency himself.

His heart pounding, he reached for the hotline to call his supervisor.

The black BearCat G3 bore north on the unmarked strip of macadam that linked Satu Mare City to the tiny farming village of Rosalvea in the Carpathian foothills. Its windshield wipers beating off fat, wet flutters of snow, the vehicle moved smoothly and quietly for a big four-tonner armored with hardened ballistic steel panels.

At the wheel was Scott Dixon of the CIA’s elite manhunting Fox Team, recently placed under operational detachment to Net Force. Kali Alcazar sat beside him. In her late twenties, she had short silver-white hair and wore a black stealthsuit and lightweight plate vest. They were standard organizational issue. A Victorian English adventurer’s belt and a vintage film-canister pendant hanging from her neck were personal additions.

“How we doing timewise?” Dixon asked.

Kali looked at her dash screen. On it was the same controller’s interface Nicu Borgos was struggling with at the power distribution center. A moment ago she had seen the circuits trip in rapid succession.

“Pickles,” she said. Using the unfortunate name given to the vehicle’s AI by its architect, Sergeant Julio Fernandez.

“Outlier,” she corrected. Using the dark web handle she had long ago created for herself.

She clicked her tongue. Fernandez had infused the AI with one too many of his stubbornly aggravating personality traits. But the upside was that, like Julio, it was also smart, nuanced, and intuitive. She could live with it.

In front of her now, the panel on-screen was replaced by a sector-by-sector map of the region, its cities and towns numbered according to the substations that supplied their electricity. The five already off-line were black, the rest red.

She watched as a sixth went dark.

“Over half the stations are down,” she said. “Total blackout in about five minutes.”

“Bitter cold out, a quarter million people without light or heat,” Dixon said. “Women, children, seniors. All for the sake of bagging one guy.”

She glanced over at him. “The hackers—the technologie vampiri—are the local economy. The government protects them. The polizei, the citizens, everyone.”

He shrugged with his hands on the wheel. She was right. Suspicions definitely would have been raised at the syndicate’s current headquarters— the Wolf’s Lair—if they only cut power to its surrounding village.

“Tougher than it was on New York?”

Dixon didn’t answer. Four months ago the vampiri had launched a cyberattack that left the East Coast a shambles, killed hundreds, and almost took out the President. Now his team’s pursuit of the Wolf had led them out here to the Romanian boonies, making them key players in the first fully integrated operation conducted by the various elements of America’s new Department of Internet Security and Law Enforcement. Net Force, in bureaucratic government shorthand.

He really did get it.

The BearCat rolled between the gigantic evergreens standing sentinel on either side of the road. In the rear compartment, Gregg Long, Fox Team, sat with a small detachment on loan from Task Force Quickdraw—six men in tactical gear with Mark 18 CQBR carbines strapped over their shoulders and short-barreled Mossberg 590 combat shotguns racked to the sides of the passenger compartment.

“Distance to the target?” Dixon asked after a few minutes.

Dixon nodded and checked the speedometer. He was doing about fifty. So a little over half an hour.

Taking his hand off the wheel, he adjusted his earpiece and hailed Carmody on the ground-to-air.