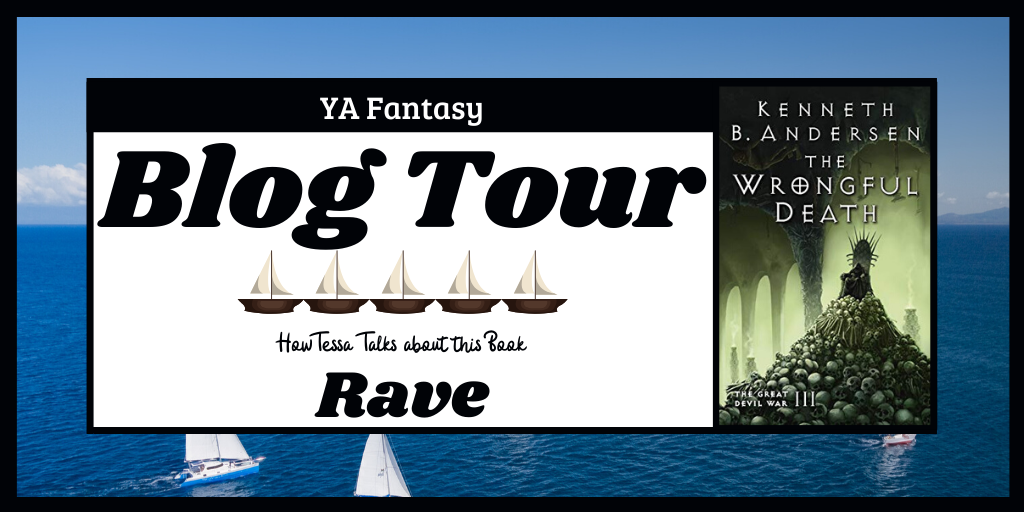 Book 3 in the multi-award winning series. Continuing the dark and humorous adventure that begins with The Devil’s Apprentice and The Die of Death.

An unfortunate chain of events makes Philip responsible for the untimely death of the school bully Sam – the Devil’s original choice for an heir.

Philip must return to Hell to find Sam and bring him back to life, so that fate can be restored. But trouble is stirring in Lucifer’s kingdom and not even Philip can imagine the strange and dark journey that awaits him.

A journey that will take him through ancient underworlds and all the way to Paradise.

The Great Devil War is a gripping and humorous tale about good and evil seen from an unusual perspective, wrapped in a fast-paced plot full of adventure, mystery, and engaging characters, and set in a world beyond your wildest dreams…

For a description and review of book 1 click on The Devil’s Apprentice.

For a description and review of Book 2, click on The Die of Death.

How Tessa Talks about this Book: Raves (5-star)

I continue to be amazed as I watch Philip’s journey of self-discovery and just good ole growing up. In this story, Book 3 (out of 5), I loved experiencing the pivotal moment of the inciting incidence, that point where there is no turning back for the main character, and it is quite spectacular. I can already tell that Books 4 and 5 are going to leave me breathless.

Character development is genuine and relatable. Philip is quickly maturing, as all middle school children do, into a hormonally driven teenager. But, unlike a typical teenager, Philip is becoming more and more burdened with metaphorical and real demons. This struggle adds an enthralling level of intrigue rarely seen. His growing relationship with Satina is still heartwarming in the innocence of young love. Though I have to admit, there is part of me that is starting to question her motivations just a little. She is a demon – a temptress – after all.

The afterlife is becoming more and more complex. Hel and Hades exist alongside Lucifer, but they are fading away from a lack of people believing in them. And Heaven is a middle ground – the original Garden of Eden – where everyone must do their part to keep it going – sloth is a sin, lest we should forget. The settings are fantastic with their complexity and attention to detail. It allowed me to explore all that I never dared to imagine, and they now feel as real as a place I visit often.

This story has more mysteries to solve, as Sam is lost somewhere in the underworld, and a demon has stolen from Death, again. Weird things are becoming the norm as we draw closer and closer to the inevitable war in Hell. It spurs the imagination to think of how Lucifer has controlled all the demons for this long since, by their nature, they are uncontrollable.

The school in Hell is my particular favorite. Even the concept makes me giggle. I love the fact that they were having a lesson on how to find the perfect branch to make a slingshot out of and can imagine many more incredible experiences like that one. The story is beginning to turn dark, so it’s moments like these in the plot that helps break up the darkness before it engulfs characters and readers alike.

The story ends in a cliff hanger that has me wishing I could read the final two books now. I’m not sure how things are going to turn out as there is nothing predictable in this tale of a boy who erroneously became the Devil’s Apprentice.

Thank you to The Write Reads and Kenneth B Andersen for providing me with a copy of the book in exchange for an honest review.

Kenneth B. Andersen (1976) is an award-winning Danish writer. He has published more than forty books for children and young adults, including both fantasy, horror, and science fiction.
His books have been translated into more than 15 languages and his hit-series about the superhero Antboy has been turned into three movies. A musical adaptation of The Devil’s Apprentice, the first book in The Great Devil War series, opened in the fall 2018 and film rights for the series have been optioned.
Kenneth lives in Copenhagen with his wife, two boys, a dog named Milo, and spiders in the basement.

3 Replies to “Book Review | The Wrongful Death by Kenneth B. Andersen”