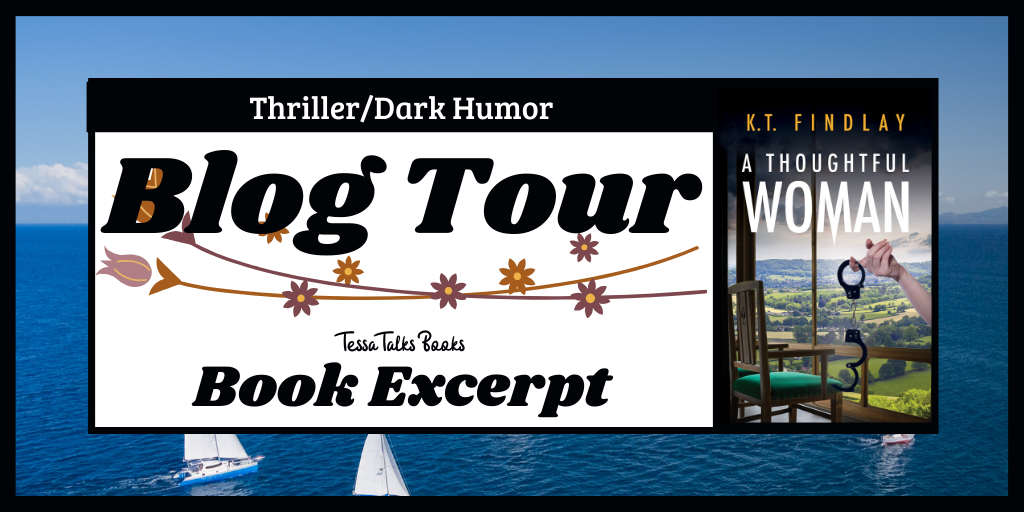 Artist Sally Mellors has planned the perfect revenge, but with two secret agents on her tail, and her best friends running the police investigation, getting away with murder is going to be tricky…

Everybody loves Sally. She’s a funny, generous, warm hearted friend, without a nasty bone in her body.  Isn’t she?

Unknown to her friends, Sally’s discovered another side to herself, cool headed and relentless, as she hunts down the three men who killed her husband.

But Sally’s not the only one with an interest in the trio. Unknown to her, two agents have arrived in town, urgently hunting a missing man and his diary, which could blow their organisation apart. Their best leads are the very men that Sally’s hunting, and she’s getting in the way…

Note from the author about the excerpt:

Freddy and James are intelligence agents who’ve been secretly watching Sally in action, and are considering whether they should recruit her or not. We join James at a point where they think she’s planning something big, and he’s positioned himself on the top of an old iron age hill fort where he can watch her from a distance.

Please enjoy this excerpt of A Thoughtful Woman by KT Findlay:

There was no sign of Sally at the Throcking end of the moor yet, but James was hardly unoccupied. A man in his early thirties saw him with his binoculars around his neck and made immediate enquiries.

‘Twitcher or birdwatcher?’ he demanded.

James gazed at him levelly. ‘I beg your pardon?’ he asked, far more politely than he felt the man deserved.

‘Are you a twitcher or a birdwatcher?’ the man repeated. ‘It’s a fair enough question.’ he added, as if to justify himself.

The man’s face creased in frustration. ‘Yes, yes, I can see that, but are you a twitcher or a birdwatcher? Which are you?’

‘I haven’t the slightest idea what you’re talking about.’ replied James.

‘The man narrowed his eyes. ‘New to it then are you?’

‘First day.’ confirmed James, hoping against hope that the man would go away, but instinctively recognising a leech when he saw one.

His unwanted companion beamed, and thrust out his hand. ‘Then it’s a lucky day for you my friend! Luke Featherstonhaugh at your service, but most people call me Feathers!’ he laughed happily, as an unwilling James accepted his hand.

‘James.’ James replied curtly, damned if he was going say he was pleased to meet this creature.

‘The first thing to know,’ Feathers said earnestly, ‘is that a birdwatcher is a decent, wholesome person who’s interested in the birds he sees, tries to learn as much as he can about them, and treats them with respect. A twitcher,’ and here Feathers’s mouth formed the nastiest sneer James had seen in years, ‘is nothing but a glorified trainspotter! All he cares about is adding another bird to his list, and he’ll happily trample over its habitat, deprive it of food, crush its eggs, anything, as long as he gets his wretched photograph! Ghastly people! Wicked people! Evil incarnate!’

James examined the intensely angry, puffy red face before him. ‘Ah.’ he said to himself. ‘What we have here is an enthusiast…’ and equally silently, he groaned inside.

On the outside though, he maintained a veneer of scrupulous civility. ‘Are those the official definitions?’ he enquired.

Feathers snorted. ‘It’s certainly how we define it in the Greater Throcking Birdwatching Club.’

‘Large organisation is it?’ asked James sarcastically, then instantly kicking himself for giving the man an opening to talk about his wretched club.

‘Large? Oh my heavens yes. There’s seven of us now that Boggy Sunderland’s joined up. He’s a real coup you know. Knows more about the Pied Flycatcher than anyone else on the coast! We were lucky to get him.’

‘Yes… I can see that…’ murmured James. ‘I’m much too new to it to be of interest to a club I think.’ he suggested as his first serious attempt to disengage.

‘Nonsense!’ boomed Feathers. ‘Chicks are the lifeblood of any birdwatching club! We love teaching new members. You must join!’

Then, suddenly aware that James’s body language wasn’t expressing overwhelming enthusiasm for this suggestion, he leaned in to play his top card. ‘Look, we don’t normally do this, but seeing as it’s my afternoon off, I’ll stick around and get you off to a good start. Now let’s have a look at those binoculars of yours so I can tell what you’ll be able to see and what you won’t.’

As the tsunami of passion and enthusiasm broke over him, James tried to console himself that nobody, nobody at all, could doubt that he was up in this wet, windy, godforsaken spot for any other reason than to look at birds.

K.T. Findlay lives on a small farm where he dovetails his writing with fighting the blackberry and convincing the quadbike that killing its rider isn’t a vital part of its job description.

3 Replies to “Book Excerpt | A Thoughtful Woman by KT Findlay”