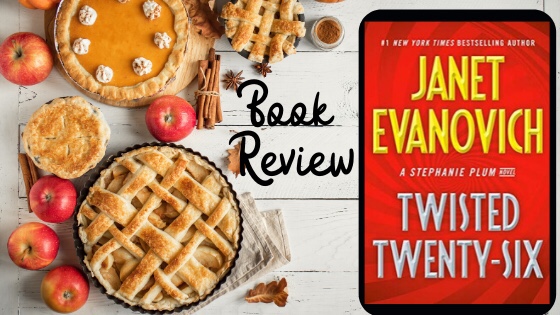 Grandma Mazur has decided to get married again – this time to a local gangster named Jimmy Rosolli. If Stephanie has her doubts about this marriage, she doesn’t have to worry for long, because the groom drops dead of a heart attack 45 minutes after saying, “I do.” A sad day for Grandma Mazur turns into something far more dangerous when Jimmy’s former “business partners” are convinced that his new widow is keeping the keys to a financial windfall all to herself. But the one thing these wise guys didn’t count on was the widow’s bounty hunter granddaughter, who’ll do anything to save her. (Amazon.com)

I don’t know if Grandma Mazur is my favorite character because she reminds me of my own grandmother, who is still spunky at 93. Or, if it’s just because she is a seventy-something grandmother who goes to the shooting range once a week, turns viewings at the local funeral home into a contact sport, and plays bingo like a professional. But, she has always been my favorite character. She grabs onto life and lives it to its fullest. And she makes me laugh so hard my sides begin to hurt.

Janet Evanovich pays tribute to how long the series has been going and how old Stephanie would be if she had aged in real-time. This acknowledgment may seem like a simple thing, but readers have started to notice the lack of time progression in the series – in a not so pleasant way.

”And I’m stuck in a rut. I’m fifty-six years old, and I’m still doing the same stupid stuff.”
“Say what? You’re how old? How can you be fifty-six?” I looked over at Lula.
“Did I say I was fifty-six?”
“Yeah, and we know that’s wrong because that would mean I’m a middle-aged lady, and I’m not ready for that… Your mama is fifty-six. Not that fifty-six is so bad since fifty-six is now the new thirty-six.”

Stephanie Plum, a not-so-good bounty hunter, has to find the missing keys and save herself and her grandmother from the bad guys in a crazy, unexpected way, nonetheless. She always seems to stumble her way to success, but 25 books later, I think that noone gets lucky that many times, so maybe she is not as bad as she thinks she is. Mostly, she lacks confidence – in life and love.

I have always loved that Janet Evanovich embraces the New Jersey stereotypes and has so much fun with them. From the hot Italian cop to Lulu, the former prostitute, every character knows their stereotype and stays true to it. I grew up in Delaware (right next door to New Jersey) and remembered those stereotypes well, so that little piece from my past keeps me in stitches.

This novel and the whole mystery series is very fast-paced and full of action. The pages flip fast and furious as I couldn’t wait to experience the next scene – a failed apprehension, a romantic encounter, or a family dinner because they are full of humor.

What I Wish about Twisted Twenty-Six

Stephanie shows some growth in this novel, where she hasn’t done so in past stories. She is questioning her choice of career to the point where she is ready to switch careers. Though Stepanie has talked about finding a new profession in the past, this time, it reads more genuine rather than just her reacting to an event. She needs to grow to continue to be relatable. Stephanie showing growth is my biggest wish if the series continues – that she shows some real growth in her career, in love, and her whole living situation.

That is simple – READ this book today! And enjoy the fun ride you will have while you do.