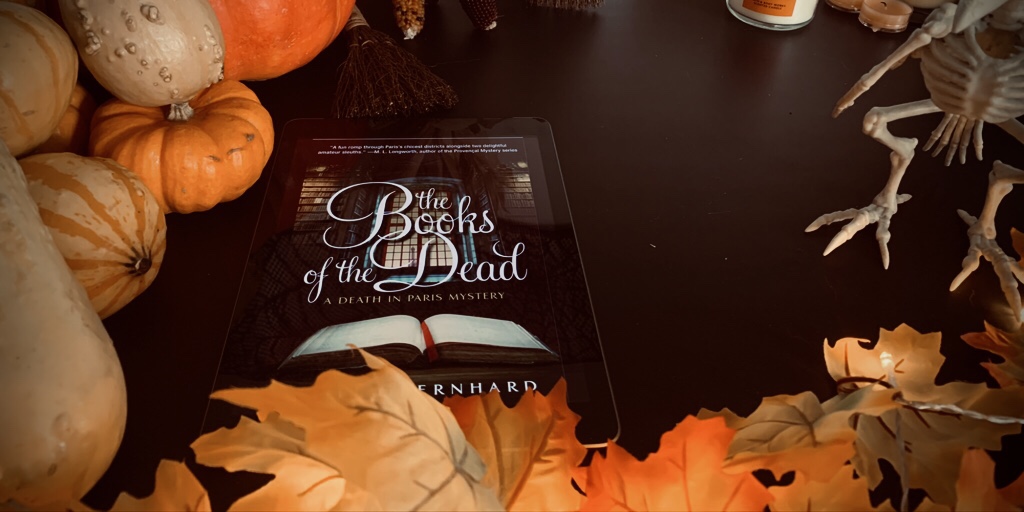 ⭐️⭐️⭐️⭐️ | What mystery plot would be better for people who love to read books than a one about a crime in a library? The Books of the Dead, #2 in A Death in Paris Mystery series, is fast-paced, fun, and focused. The setting in Paris, France gives it an international air of mystery as American poet Rachel Levis uses her keen powers of observation to solve not one but two murders.

The most intriguing element of the novel is the main character, Rachel Levis. Rachel is an amateur detective who longs to be a professional detective. Her desire is most notably stated when she imagines the role of police consultant with a capital “P” and “C.” I have yet to run across another novel that wants to cross the lines between sub-genres, from a cozy to more hard-boiled (from amateur detective to a professional detective), so this an original choice that piques my interest. This bit of knowledge about Rachel gives her more dimension and intrigue than the average cozy detective.

And what better place to solve crimes than the city of light – the location that most people have on their bucket list to visit – Paris, France. Having visited there once myself, I could easily recognize the places mentioned, picture the setting, and see the different characters.

The story is plot-driven and reminds me of a game of Clue, where suspects are interviewed and unknowingly provide clues toward the goal of determining who-did-it and how. Other than that, there is very little in the way of character development, which is something I wish the story had. It would add more dimension and enable it to be a more full-bodied story. Though, I do appreciate the focus of the plot and lack of unrelated meanderings.

I am looking forward to seeing where this series goes, as I imagine most mystery lovers will be as well.

When American sleuth Rachel Levis stumbles upon an employee of the French national library strangled in the bathroom of a cafe, she’s not surprised to be asked to help with the investigation by her old acquaintance Capitaine Boussicault–after all, she and her best friend Magda solved a tricky murder only eighteen months before. But right from the start, this case proves to be très difficile. When Rachel goes undercover as a librarian to determine which of his book-loving colleagues loathed the man enough to kill him, the library is rocked by more bad news: a priceless antique book has been mutilated. And the very next day, her favorite suspect for the murder is found dead in the stacks. Just as the case is heating up, Boussicault pulls Rachel from the investigation. Undeterred, she and Magda decide to forge ahead with their own investigation–even if it could put them at odds with the police and in serious danger. With evidence and suspects piling up, it will be up to them to find the culprit–and stop more innocent books from being harmed–before anyone else checks out for good.