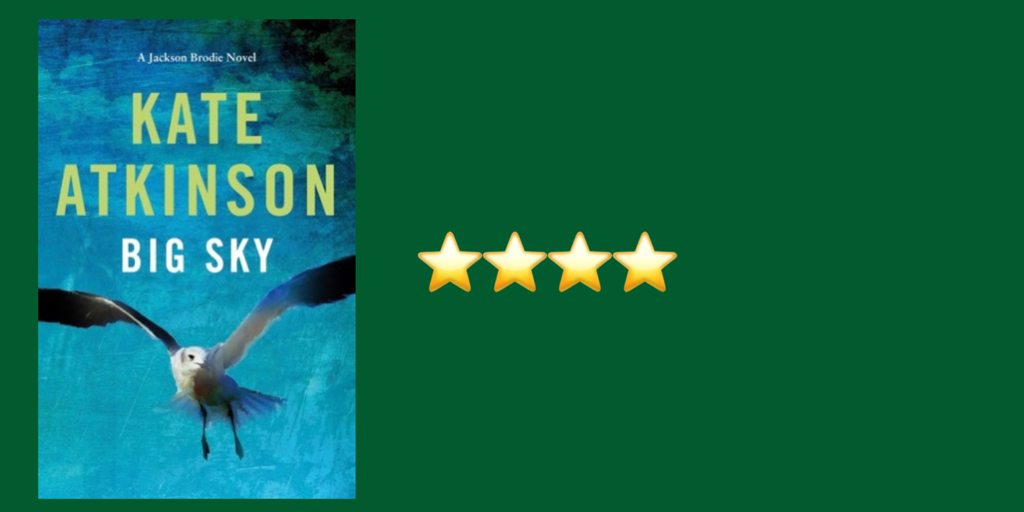 How would Dashiell Hammett’s books read if he had been British instead of American?  They would have read much like Kate Atkinson’s newest novel, Big Sky.  The book delights and entertains with its clean, unique prose, unrestrained eloquence, and remarkably haunted characters.  Noir days are back, thanks to Kate Atkinson, and they are better than ever.

What I Liked About the Story

It was easy to immerse yourself in even if you haven’t read the first four books in the series.  I have not had the pleasure of reading a Jackson Brodie novel, and this one is #5 in the series.  I was a little nervous about how much I missed by not reading the first four, but still, I forged ahead, and I am glad that I did.  The novel reads as complete as any stand-alone novel and makes you want to read the previous four, not to understand the back story, but just because you love Private Detective Jackson Brodie and can’t get enough of his journey.

All characters are fully developed.  In a classic hard-boiled mystery, the detective struggles with his or her inner demons from their past.  In Big Sky, every character has inner demons, and you finish the book understanding these inner demons as well as you know your own.  It’s rare to find a novel that fleshes out its minor characters as well as its main character(s), so I applaud Big Sky for this feat.

Big Sky gives the reader a whole new perspective of England.  Whenever I think of England, I think of civilized, prim and proper people and culture.  Big Sky provides the reader with a whole new way of thinking about England, and it will be forever changed as a result.  As an American, I am very aware of the seedy side of my country, but now I know we are not alone in that – England also has a seedy side that’s every bit as dark, dirty, violent, and greed-filled.

Big Sky takes the reader back to the classics of the genre.  The tone of Big Sky took me back to the noir days of Dashiell Hammett and Raymond Chandler, which gave the novel not only an authentic feel but a shout out to the classics as being the greats that they are.

What I Wish About the Story

There had been the same flow in the first third of the novel that there is in the remaining two-thirds.  The plot was much like a game of chess, and as in every game, the first thing that must be done is that the board needs to be set up.  In a novel, that translates to the first third of the story being dedicated to introducing the pieces that will play a role in the mystery.  Unfortunately, that reads like a disjointed collection of characters that are difficult to remember because you do not yet know their relationship to one another.  I felt the need to map out the characters on paper, so I was not lost when they were brought back into the story rather than the story flowing with a continuity that makes character introductions natural.

The story had ended after the mystery is solved and explained.  I was surprised that the story kept going after the big reveal.  The continuation of the characters’ stories didn’t add anything to the plot of the story, but it was interesting to see what happened in the picking-up-the-pieces stage of the characters’ lives.

Read!!! I am happy to enthusiastically recommend this novel.

Thank you to Little, Brown, and Co. and NetGalley for the opportunity to review this novel in advance with the promise of an honest review.

For your convenience, I have provided direct links to the following book sellers:

Also available on Apple Books but must be accessed via the app.