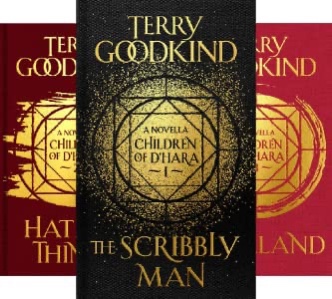 Terry Goodkind’s latest work of fiction, the first of five novellas to be published every three months , is like reconnecting with old friends. I didn’t realize how much I had missed Richard and Kahlan – the perfect magical couple in a world full of mostly magical troubles – but I found catching up with them was both satisfying and rewarding.

Origins of the term Scribbly Man

When I first heard the title, The Scribbly Man, it sounded like something of which childhood nightmares are made. It intrigued me with its complex simplicity – a bad man that looks like he was made of scribbles. An easy concept to imagine on a page but very hard to visualize as a three-dimensional creature of immeasurable strength. The Scribbly Man is the minion of Richard and Kahlan’s latest foe – the self-declared golden goddess from another world.

The return of Richard and Kahlan

The characters are true to who they have always been, and the addition of Shale fills the void that Nicci, who is off on her own adventures, left. Coming into this story without first reading the Sword of Truth series may be a bit difficult on one level – since there is much back story that was a part of the main characters development – but on the other hand it may work if the reader is willing to just go with it and experience the story as is.

The Beginning of an Epic Story

The Scribbly Man is hard to review because it is not a story in its entirety, so drawing conclusions and talking about the deeper meanings is just speculation at this point, but I can say that this first book has me looking forward to the other four, without a doubt. We learn that Kahlan and Richard are going to go through a long-awaited personal struggle in a big way. And that when Richard changed the night sky, he moved the planet and now they have moved close enough to an enemy from another world that they must contend with her and overcome an evil that is worse than any evil they have fought before.

I’ve seen other reviews that have complained about having so many challenges are beginning to feel contrived. Yes and no. The reality is, Goodkind writes fantasy fiction and the conflicts in fantasy fiction are by their very nature – epic. A book solely about the everyday struggles of a leader listening and solving complaints just would not be fantasy nor would it be compelling to read. So, I am more than willing to go there and believe that Richard and Kahlan had to endure so much from so many megalomaniacs.

Goodkind has always had a deeper meaning in the conflicts he chooses to write about, and I am looking forward to discovering that truth as this series unfolds. As always, the book keeps a fast pace plus, as a novella, it contains significantly fewer pages than most of Goodkind’s books – so easily read and enjoyed in one weekend. Goodkind balances out action and exposition so that you never feel like the story is dragging on, but you have a clear picture of the world and the people living within it. The Scribbly Man does not disappoint.

I will be posting mini reviews of The Hateful Things and the soon to be released Wasteland on 10/22.

2 Replies to “Book Review| The Scribbly Man by Terry Goodkind”