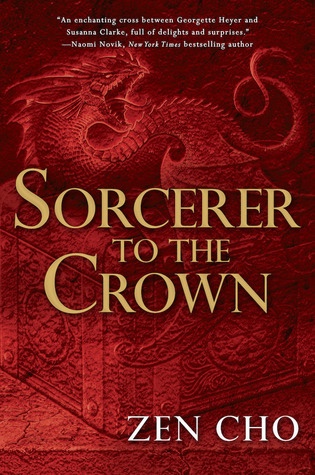 Sorcerer to the Crown by Zen Cho

I’ve discovered a talented new author for my bookshelves! Zen Cho’s first novel, Sorcerer to the Crown is a magical trip back in time to a Victorian England that is full of magic and mystery. On the novel’s darker side, Cho explorers racism and sexism in that world which was abundant but tackled nonetheless.

Cho’s novel is set in Victorian England and her choice of a more formal vernacular is an unexpected shout out to classic literature from that time – Middlemarch, The Pickwick Papers, and Wuthering Heights to name a few. It makes the readability a bit cumbersome at first but it is well worth it, as it transports the reader to that period of time in all ways that words can.

I found that Philip Pullman came to mind as I realized that Cho writes in a similar style. Her use of familiars initially caught my eye, but whereas she uses them to add magic from the fairy world, in Pullman’sThe Golden Compass series they were used to reflect the true nature of the person for whom they were attached. Cho’s familiars, granted only to a few select people, are a status symbol for the magician who is bound to one becomes elevated to the role and title of sorcerer, which reflects the importance of status during that time.

Women, who are frail, nonsensical creatures were not permitted to use magic. The men who presided over the magical community felt that it was a waste of the ever decreasing levels of magic that came to them from the fairy world. Women would misuse the magic for picking ball gowns and the like. They are such frail creatures that it was in their best interest not to delve into a man’s world. And then in walk Prunella Gentleman and Mak Genggang. Both woman from other lands and both as powerful if not more in the magical arts as the men. The instinct was to fight back, to put them in their place but Cho showed through her strong feminine characters how vain this is. If the men wanted to continue to use magic, they would need these women. Mak Genggang to restore the flow of magic from the fairy world and Prunella to lead them as the grand sorceress she was born to be.

Racism was also explored as both Prunella and the main character Zacharias Wythe are dark skinned. The evil of racism was shown through Cho’s character Mr. Midsommer who would stop at nothing to end Zacharias’ term as Sorcerer Royal simply and admittedly because of the color of his skin. Stephen Wythe – the previous Sorcerer Royal and adopted father of Zacharias, chose to raise a boy born of slaves just for this reason. He wanted to break down the walls that were stifling the magic and open up the world to new possibilities. With the advancement of Prunella to Sorcerer Royal, all the walls that had been built over many generations were rapidly melted away and a new world order emerged.

Cho is timely yet classic in her approach to fantasy literature, and every reader should stop and appreciate this subtle fact as they are transported to the world she created. Her next book, The True Queen, comes out later this month and I for one am looking forward to finding out what happens next!