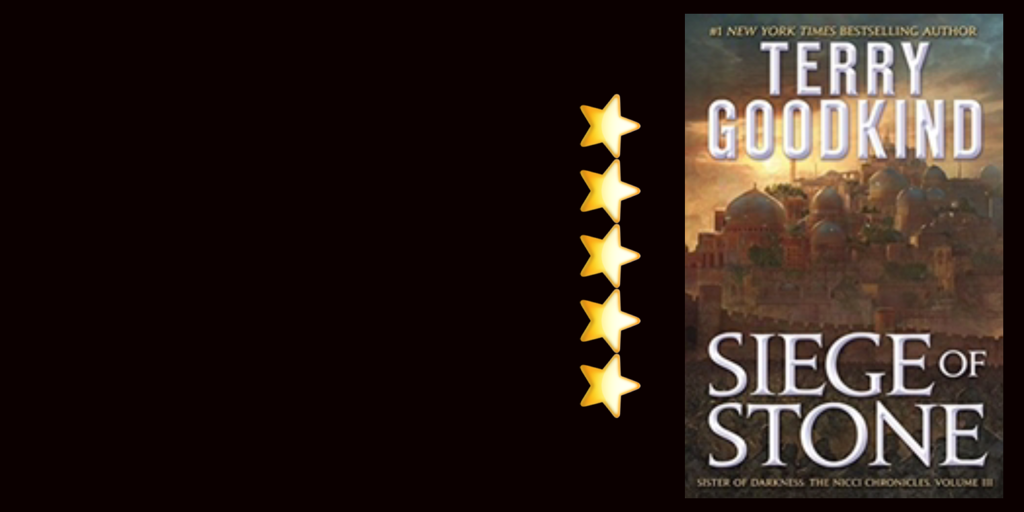 A review of Siege of Stone by Terry Goodkind

Update: Book 4 Heart of Black Ice is scheduled to be released in January 2020

The story of Nicci and Nathan in the Old World forges on, and now the stone army has awakened. Siege of Stone is not the anticipated conclusion to the Nicci Chronicles but an important episode of the story in the new dawn of the Old World. Or is it a new dawn? There is a vacuum of power in a land that was ruled by one conquering emperor after another and Richard Rahl is trying to fill it his own way in absentia. Old habits die hard though, and when the ancient army of a conquering empire awakens and meets a like-minded king, the old way of thinking rises up once again.

Terry Goodkind is a master of the action-scene and his latest novel maximizes this skill. Siege is fast-paced with little exposition but instead focusing on the action that drives the story. After the fall of Jagang, the Old World experiences peace and a period of regrowth – a period of little action that cannot last indefinitely and the newly awakened stone soldier, General Utros, along with his over one hundred thousand stone army seek to finish a war they started many centuries ago. The question underlying the action is how will Nicci fulfill the Red the witches’ predictions and save the world? We still don’t know at the end of the novel with Nicci lost, Ildakar once again gone, Bannon captured, and only Nathan left.

Only one character shows true growth

Character development is another of Goodkind’s strength and we see that reflected in the character of Bannon, more so than Nicci or Nathan. Bannon has gone from abused island boy with no experience being a hero or even warrior, and through the course of the novel he has learned to fight with passion, vigor, and skill, making him the true hero of the story. Nicci has been surprisingly stagnant and Nathan has had minimal growth as he grappled with losing his magical abilities. I am still holding out hope that we will see growth in Nicci as we were teased in the first book with Nicci as a mother figure and ultimately having to go through loss of a child, but there has been little progress in the second or third novel. One of Goodkind’s great writing accomplishments is having Richard Rahl continue to grow throughout the 21 novels that made up the Sword of Truth series, and I would love to see even a fraction of that with his main character, Nicci.

I read a couple of posts that refer to Terry Goodkind as misogynistic, but I respectfully disagree. The female characters in the Sword of Truth series as well as The Nicci Chronicles are all strong in their own way – sometimes with magic and sometimes with brute force. Many of them have been through bad times as have the men, knowing and overcoming rape, torture, and more but Goodkind’s books are about war and unthinkable things happen more frequently in a time of war than in a time of peace. I argue that his female characters, much like his male characters have shown great strength and resilience and this is something we can only hope our daughters have the good fortune to take away from his novels.